Why is Photo Radar Important?

In 1987 the Paradise Valley Police Department became the first agency in the nation to utilize photo enforcement. At that time Council authorized the use of photo enforcement in direct response to a steady increase of collisions in Town. That year there were over 400 reported traffic collisions. After photo enforcement was deployed the Town realized a 42% decrease in collisions. Traffic safety has always been one of the top concerns expressed by our residents. In 2013 the Public Safety Task Force, a committee comprised of 50 residents, requested an expansion to the photo enforcement program. That expansion was completed, and in 2017 there were only 208 collisions reported in Town. A 50% overall reduction of traffic collisions from the numbers reported 30 years ago, considering the increasing population/traffic count and distraction of drivers, is a definite success.

While collisions still occur, the presence of photo enforcement often reduces the damage to people and property. Lower speeds also directly equates to less severe collisions. The average mid-sized car weighs about 3,500 lbs. At 40 mph this car in motion represents over 253,000 joules of kinetic energy (energy converted to damage during a collision). At 51 mph this same car represents over 412,000 joules of kinetic energy. While the car traveling at 51 mph is still only exceeding the speed limit by 28%, that car will possess 63% more energy to create damage when involved in a collision. Less kinetic energy means less damage to people and property during a collision. Moreover, Paradise Valley is a residential community. As such, our main roads of Lincoln and Tatum run through quiet neighborhoods with driveways connecting to these arterials. Photo enforcement is an important tool for maintaining the quality of life for these residents.

Paradise Valley was the first police department in the nation to institute a traffic safety program using speed measuring devices coupled with still photography and computers to enforce speed laws. The program utilizes a semi-marked police vehicle which deploys a radar device diagonally across the roadway. A vehicle entering the radar beam in excess of a preset speed entered into the computer is photographed from the front and rear. Photographs are taken of any violation and the driver of the vehicle is cited. Since the program was instituted in 1987, traffic collisions have been reduced about 45%. Mobile Radar vehicles are placed at various locations throughout Paradise Valley and typically remain in an area for a 24-hour period.

The Paradise Valley Police Department also has a photo enforcement system for red light violators and speed violations. This system has sensors embedded in the roadway that are connected through a computer to the intersection traffic signals. When the red light phase is active, the sensors detect vehicles entering the intersection while the light is red. Photographs are again taken, and the driver of the vehicle is cited.

During red, amber, and green cycles, the same sensors measure the speed of vehicles entering the intersection, and citations for excessive speed are also issued. As with the photo radar vehicle, only the actual driver of the vehicle is required to face the charge in court. 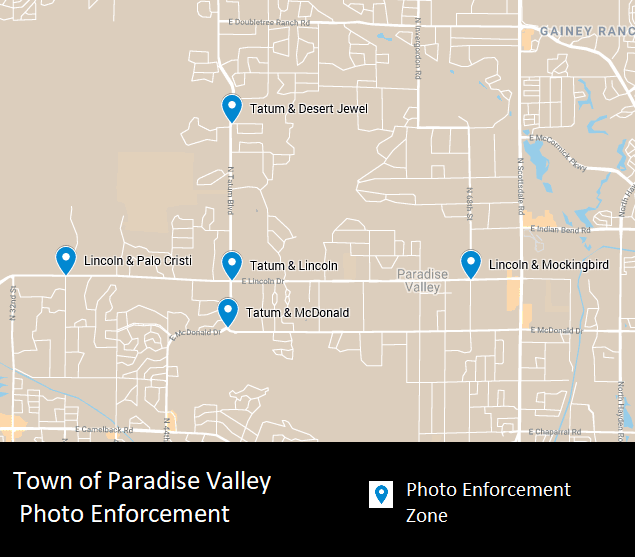