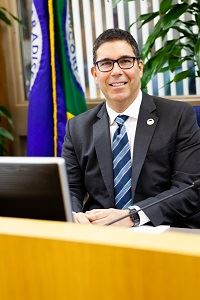 Mayor Jerry Bien-Willner proudly serves as the directly-elected Mayor of the Town of Paradise Valley, having won re-election to a third term as mayor in 2022.  Prior to his selection as the Town’s Mayor, he volunteered on the Town Council for four years, serving two consecutive terms as Vice Mayor, and on the Town’s Planning Commission.  In 2022, Mayor Jerry Bien-Willner was named to the Executive Committee of the League of Arizona Cities and Towns; he is the Town’s representative at the Maricopa Association of Governments.  All of this work has been, and is currently done, as an unpaid volunteer.

Mayor Jerry Bien-Willner is a native Arizonan. His family moved to Paradise Valley when he was three, after which Mayor Jerry attended Scottsdale public schools (SUSD) through high school. Jerry attended Claremont McKenna College on a four-year academic merit scholarship and graduated with honors and was recognized by the faculty for the highest academic achievement in his major Mayor Jerry earned his law degree, also with an academic merit scholarship, from the University of Arizona where he was recognized with numerous honors, including being named the Law College’s “best oral advocate” and winning a seat on the moot court board and national moot court team.

Prior to returning to Arizona, Mayor Jerry practiced law full-time with a preeminent national  firm specializing in complex litigation, taking a leading role in many high-stakes cases of national significance. Mayor Jerry and his wife moved to Paradise Valley from New York City so that they could raise their family here.  Currently, he is active in the business community as an investor and entrepreneur and maintains his credentials as a licensed attorney.

Mayor Jerry is a proud and very happy resident of Paradise Valley together with his wife, Robyn, and their children.  He feels extremely honored and privileged to serve the residents of the unique and wonderful Town of Paradise Valley, in our great State of Arizona! Mayor Jerry Bien-Willner welcomes your contact, and can be reached via email.